Are ya having a problem with your rig? We'll try to help. Share your tech tips and experiences here. Dr. Billy Glaser, author of the "Unofficial 750 Ural Service Manual" site myural.com, is moderating this section.
Forum rules
Here is the place for you to ask questions about or share your experiences about servicing or repairing your Ural or Dnepr. Please post topics concering modifications or accesories in the "Modifications and Acessories" section. Please post oil related questions in the "Oil Threads" section.
Post Reply
300 posts

I started this thread in hopes of getting advice along the way and, maybe, leaving a few breadcrumbs to others who may follow. I think the original "My . . . Story" was started by Lyndon Poskitt over on ADVrider, and it was a source of so much useful information for KTM 950 riders out there. https://advrider.com/f/threads/my-ktm-9 ... cs.147440/ Some years later, I started my own "Story" thread regarding my KTM 690 Basel Quest: https://advrider.com/f/threads/orangeci ... y.1026063/ Quite a few riders have benefited from the information left behind. So now, it's time to do the same for my Dnepr. 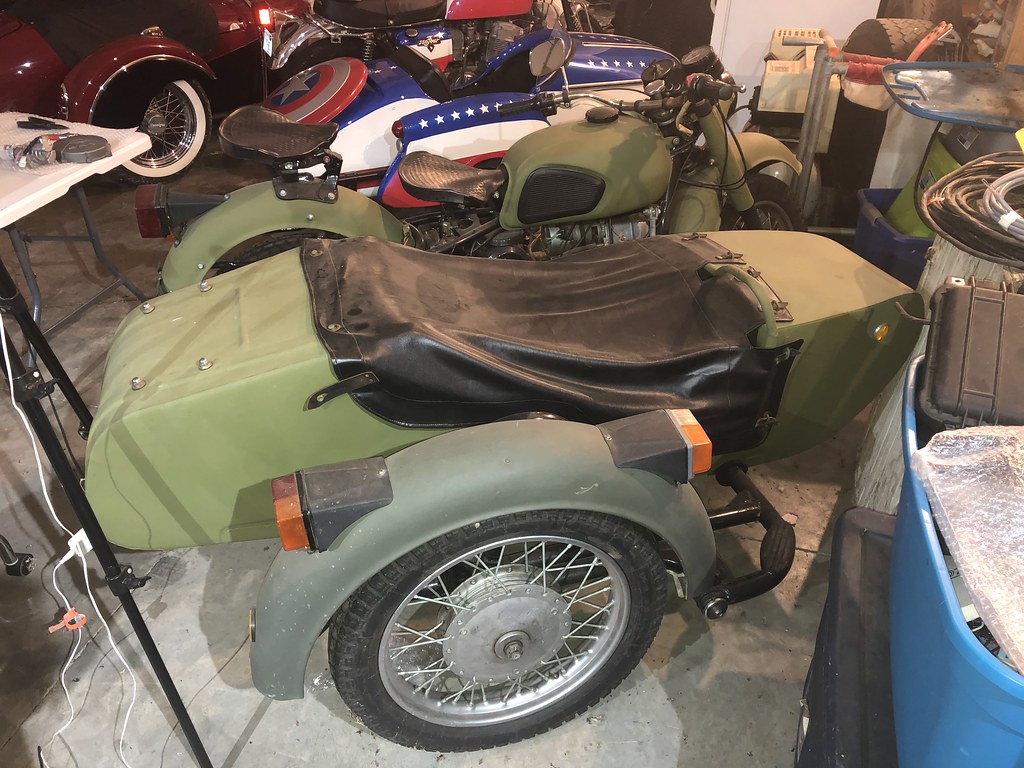 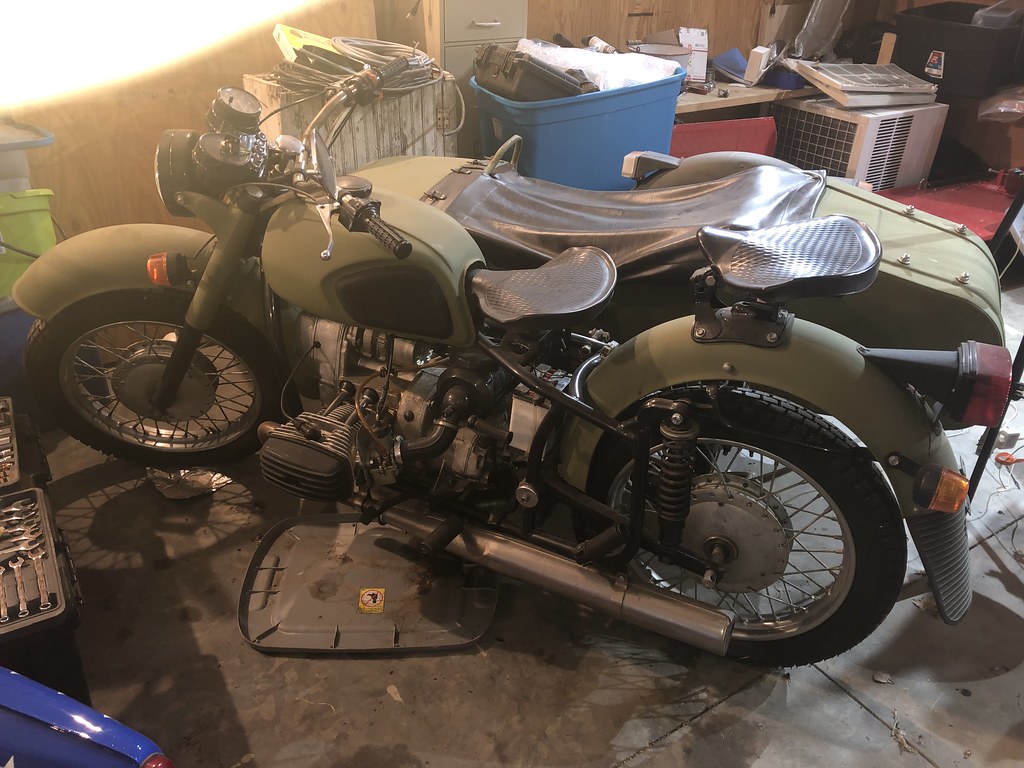 All I know about the history of this bike is that it was built in Colorado, we think in 2012. The bike has a Colorado "replacement" VIN of sorts on the frame and it's titled as a 2012. A friend of mine in Nebraska bought it in hopes of using it, but it just sat in his garage. 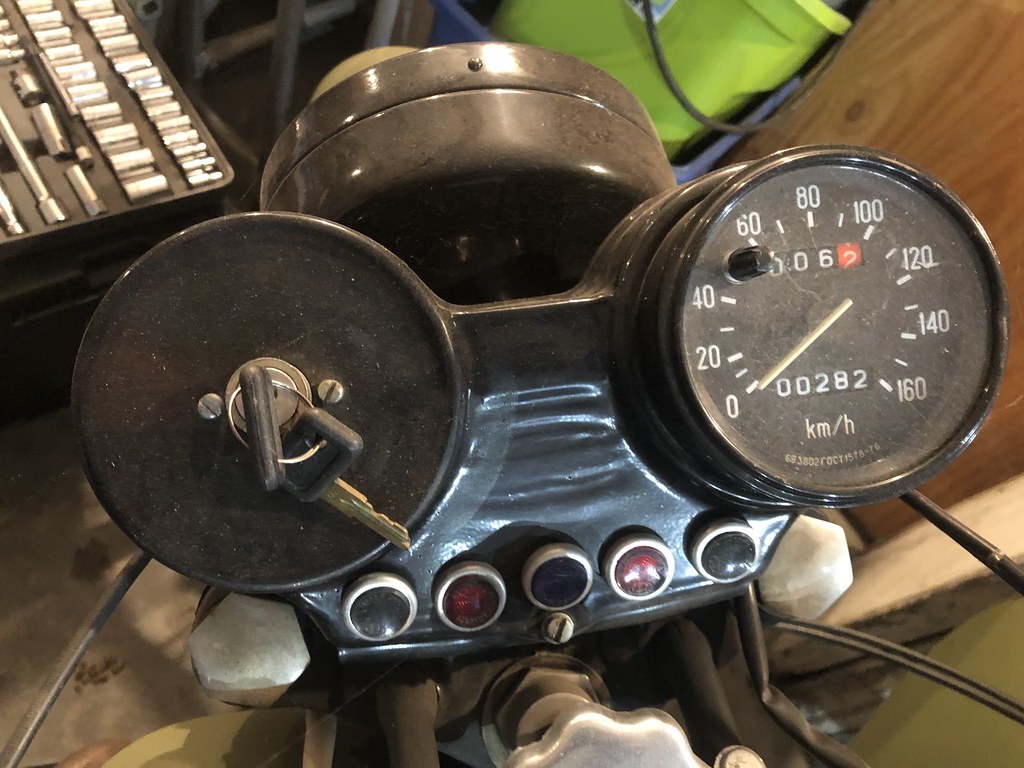 I mentioned to him that I was looking at Urals in hopes of carrying my pup around on adventures, and he said he had this Dnepr and would part with it for cheap, sooooo . . . . 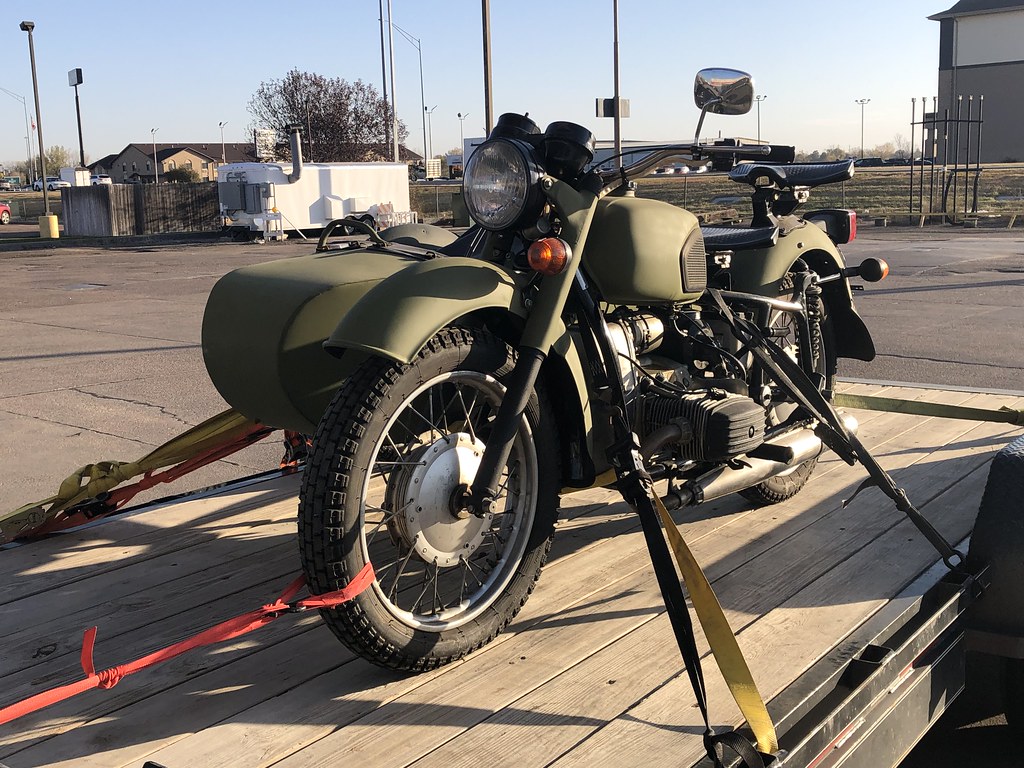 Getting a title for it in Iowa was a bit interesting. It required an investigator to come out and look at it in person and answering a lot of questions such as, "Dnepr??? How do you spell that???" In the end, Iowa had no problem with the bike and its Colorado history.

The bike originally had Pekar K-65 carbs on it, but the owner before me had installed Pekar K-68s. There were some problems there, but I got the carbs initially sorted enough to actually start the bike.

It runs, but the valve train sounds like somebody left a few extra parts in the valve covers. More to come on that.

Oh, the pup -- Blu. About the time I was committing to buy the Dnepr, we learned that Blu has oral cancer. He just had his first birthday, and he won't have another one. 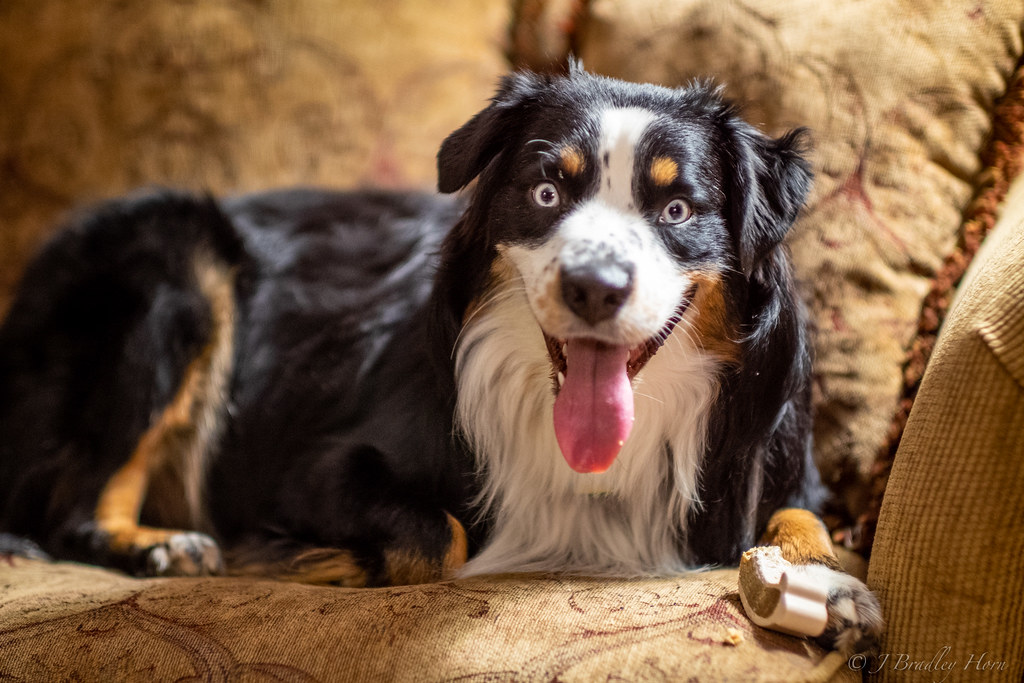 The prior owner had removed the Pekar K-65s and installed the K-68s. To make them functional, I had to rob some parts off of the 65s. The bowl gaskets on the 68s were leaking, but the 65 gaskets were new and were the same. One pilot jet on the right cylinder was hopelessly plugged, but the pilots from the 65s seemed to be the same. I'll go with that. I got the bike running, but the next day when I went to go bask in the glory of making it run, I found that opening the tank gas cutoff caused gas to just run out of the bowl overflow and onto the ground. Some quick inspection revealed that the left float was full of gas -- apparently a common problem. Rats! A K-68 repair kit is on the way from Kiev. 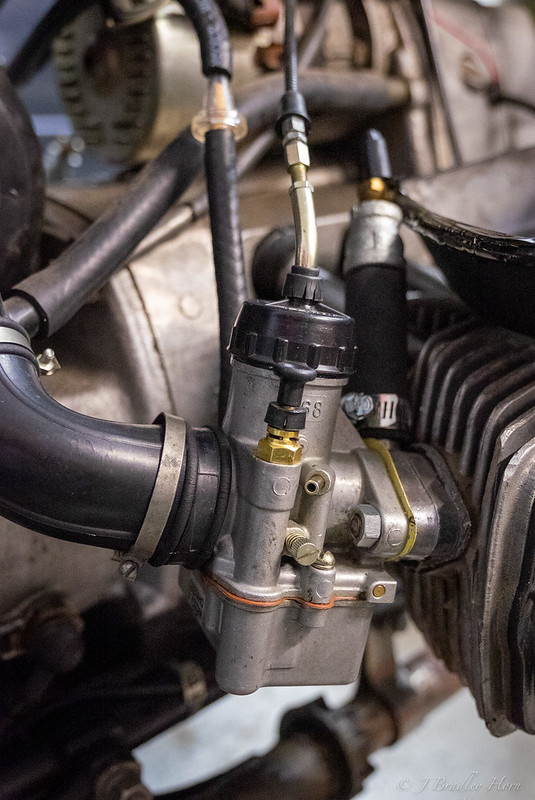 The plate that is between the carb and the head is a port put on by the prior owner that is sometimes referred to as a "turbo." The idea is that it gives you a port to balance the carbs, and you can also run a hose from one port to the other on the other side to "balance" the vacuum between the two.

K-65 spare parts. Although the pilot jets seems to be the same on the two carbs, the floats are slightly different.

The mount point for the float needle is different on the two, so they don't look interchangeable. Ah well. 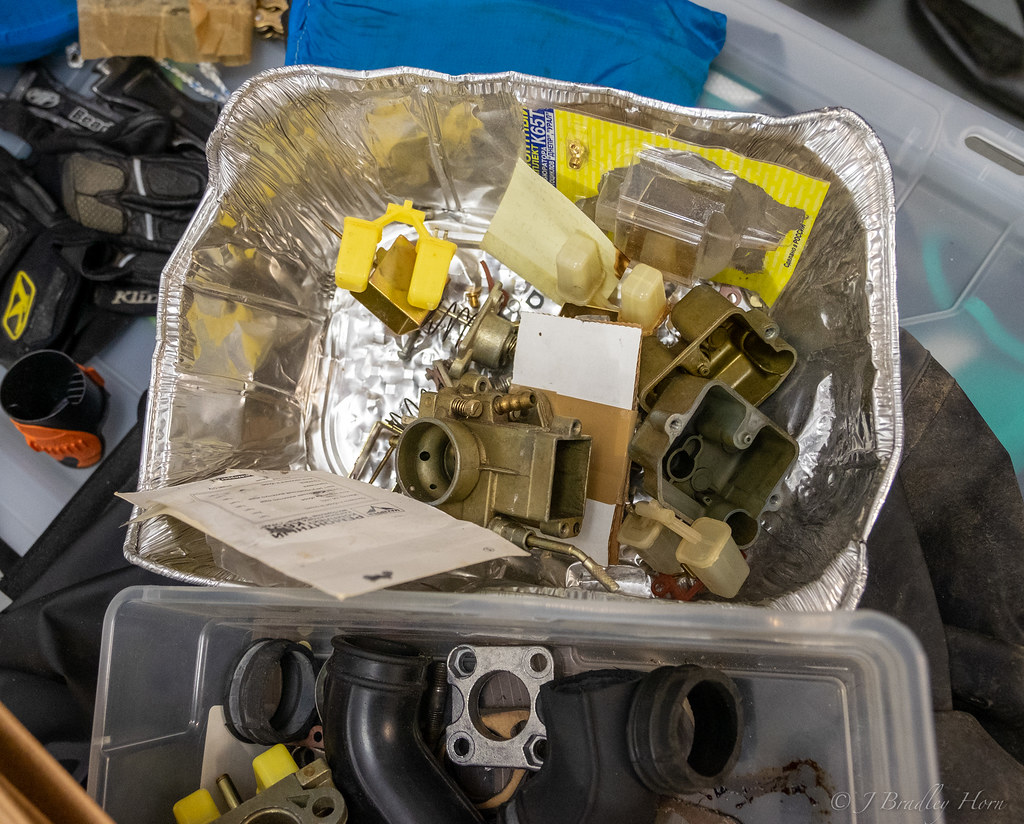 Once I pulled off the left valve cover and set the left jug to TDC, I found an intake that was out of spec by something like 3mm-4mm.

That was the crazy noise I heard on startup. However, when I adjust the valve to speck (.07mm), I find that I'm almost out of adjuster. Hmmmm. 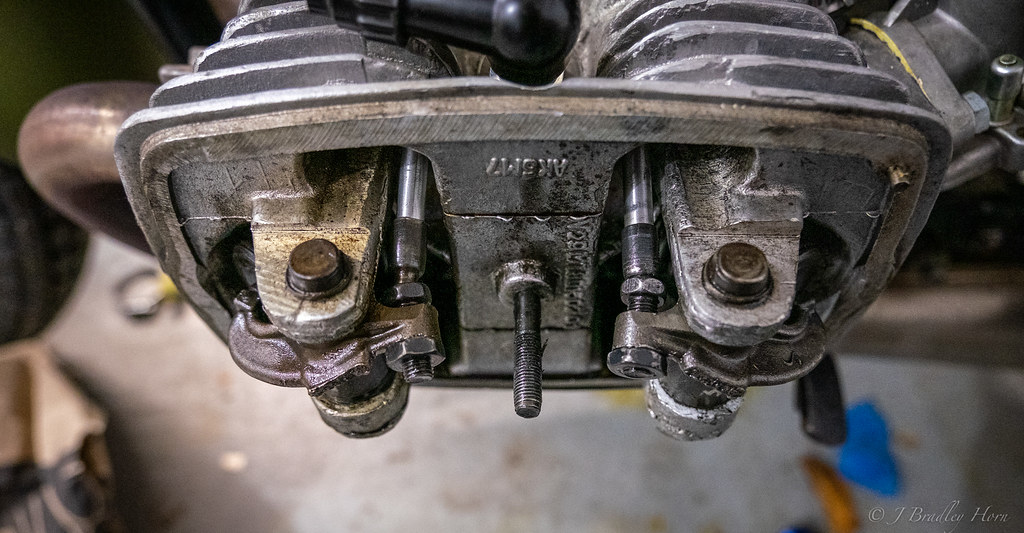 The right jug is not as bad but also showing that it's adjusted much farther in than the exhaust valve. 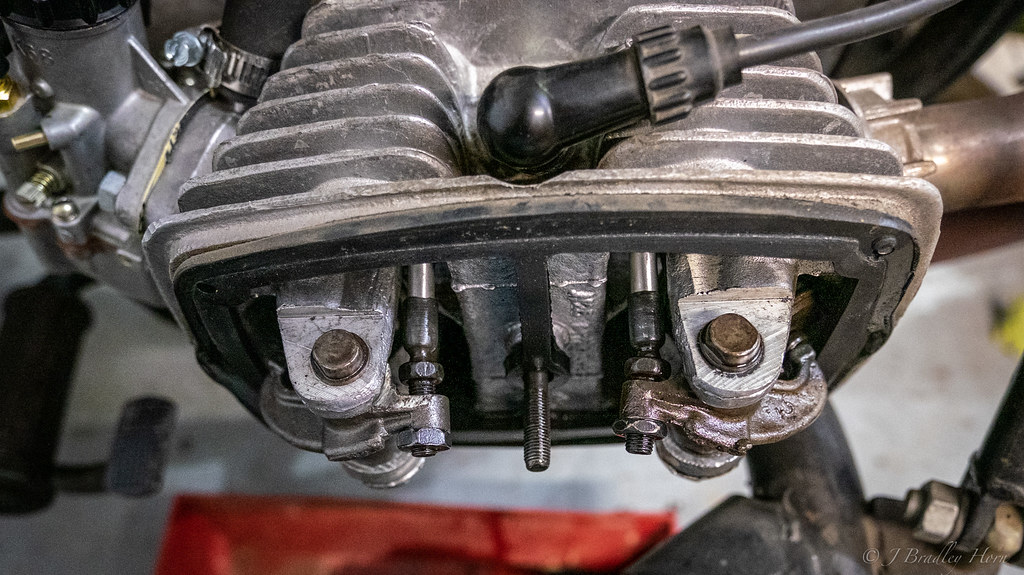 I don't get that. That valves seem to operate properly. If there were going to be abnormal wear of the cam, I wouldn't expect it to be on the part of the lobe where there is no pressure on the cam. My experience is that if there is abnormal wear on the intake, it tightens up -- usually because of poor filtration. Hmmmmm. The other thing I noticed was that the left intake pushrod was not perfectly smooth in some respect. When I spun it to make sure that it was appropriately loose, it would spin and then hang. I loosened up the valve adjustment to be correct based on the high spot of the rod, but it all makes me wonder whether there's a problem with the pushrod.

Well, I know it runs, and I can see the valves moving properly. My Dad would have said, "Can't see it from the highway," and bolted it back up. I might do the same. Thoughts?
Last edited by Orangecicle on Sun Oct 27, 2019 11:46 am, edited 1 time in total.
Top

One thing I note about this machine is that everything on it is (1) not engineered to be light, and (2) not at all "finished." I'm used to Ducatis and KTMs, where everything is made as light as possible, and everything has a certain "polish" to it. Not this bike. Apparently at the Dnepr factor, if a spot weld was good enough to hold, that's where you stopped. Clean up casting imperfections on the head fins? Naaah. "что за чушь"... ответил бы любой. 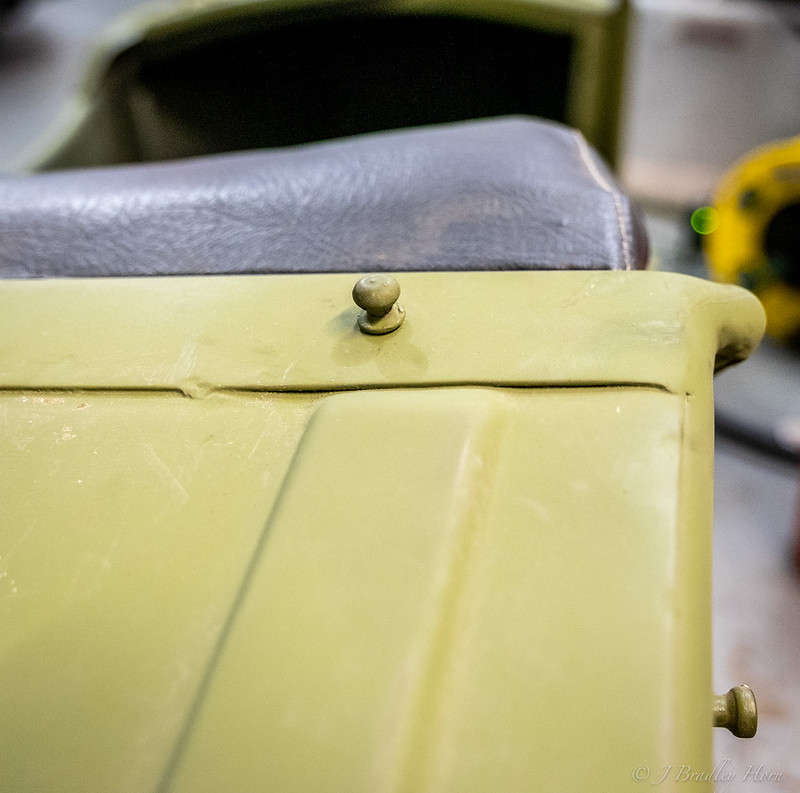 
Might want to listen to dad on this one. You will never reach perfection with these things. I have taken the approach that "good enough", really is good enough.

I could be wrong about this and it's been a while since I've been in a Dnepr motor, but I don't see the caps which I believe should be between the rockers and the valves...

ReCycled wrote: ↑
Sun Oct 27, 2019 1:48 pm
I could be wrong about this and it's been a while since I've been in a Dnepr motor, but I don't see the caps which I believe should be between the rockers and the valves...

Holy Cow! You're right, the cap is missing off of the left intake! Time to drain the oil and see if it's in the pan.

Yep. A set of valve caps are on the way to fix my little issue. I don't see any way that the cap could be in the oil pan, but I'll pull it just to see how the screen is and to give a gander at the inside of the motor. Thoughts on replacement oil? Presumably, the bike is not yet broken in. I was thinking 20W50 Valvoline or some other non-synthetic.
Top

Pulled the pan. Ew. She was nas-TY inside. No metal shavings, thank goodness, and no valve cap. Based on the oil passages, I was pretty sure it would be impossible to find it in the pan, but ya gotta look, right? Anyway, all cleaned up easily, and the inside of the engine looks fine. The screen was nice and clear. 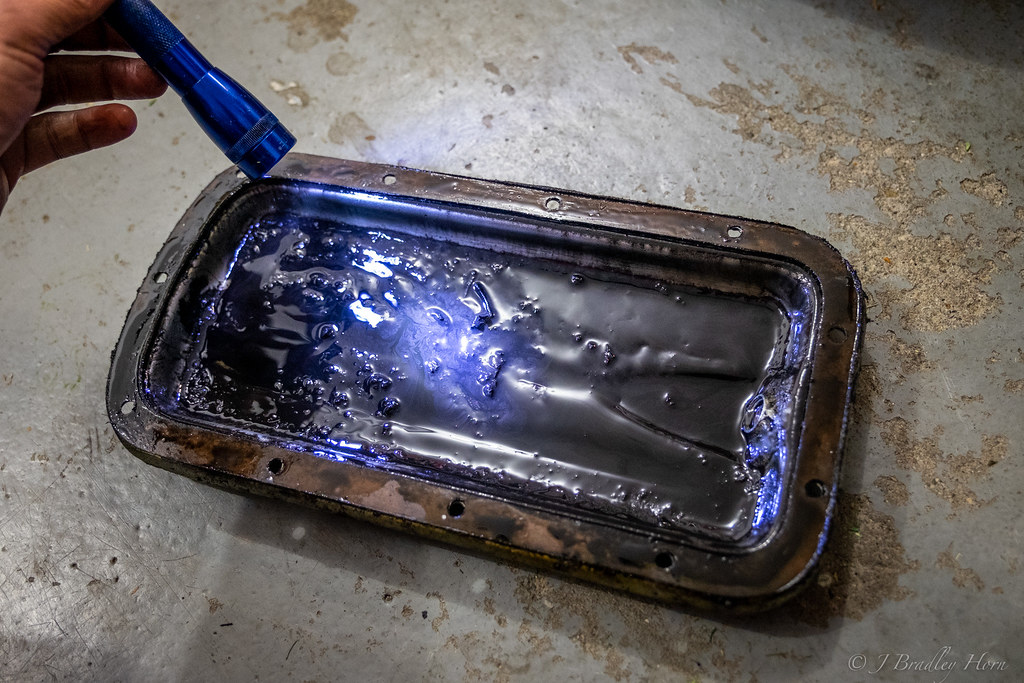 Why is every piece of rubber on this bike all but disintegrated? It's like it has been parked in a barn full of chlorine or something. 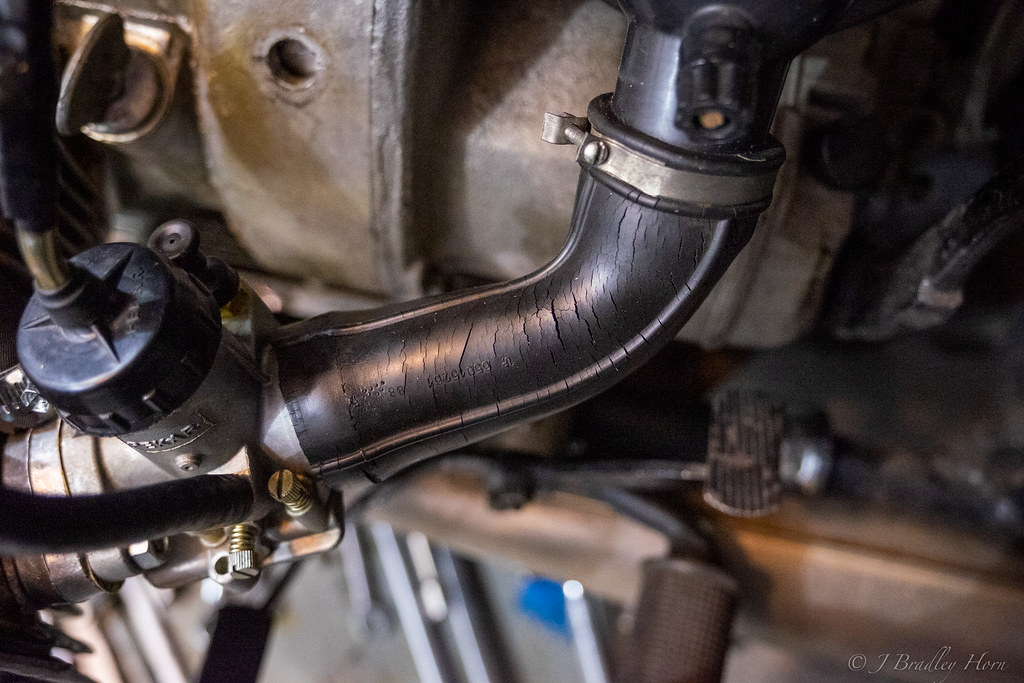 So, my goal is to get the mechanicals working properly before ANYTHING else. That said, I'm thinking long-term about the bike. I want something unique -- not the umpteenth thousandth military replica, not a Dnepr trying to look like a Ural, etc. It needs to be unique. I thought about sandblasting everything letting it get surface rust, and then clear coating everything. Old is cool, and the older it looks the better.

I also thought about something like the Janis Joplin Porsche.

janisjoplinporsche_02.jpg
I don't know. It needs to be unique; that's all I know. Thoughts?
You do not have the required permissions to view the files attached to this post.
Top

As the previous owner I am very jealous of the time you have had to delve into the machine and sort it out - I just got started and then was sidetracked onto many other projects, mostly related to houses. Nothing I was interested in but you know what they say “Happy wife...” and all that.
Top

When you get the carb rebuild kits, if the float needles are Viton tipped, all ok. If they are the ones with the loose washers, junk them and fit Kohler 127502-5 or Walbro 82-85-7.
Nothing floating about in the rocker box will get into the sump, the oil return is too small to allow it. Bits will remain in the cover or hide in the valve springs.
Judging by the state of the sludge in the sump, you need to clean the centrifuge before running the bike.

dneprlover wrote: ↑
Mon Oct 28, 2019 6:15 am
When you get the carb rebuild kits, if the float needles are Viton tipped, all ok. If they are the ones with the loose washers, junk them and fit Kohler 127502-5 or Walbro 82-85-7.
Nothing floating about in the rocker box will get into the sump, the oil return is too small to allow it. Bits will remain in the cover or hide in the valve springs.
Judging by the state of the sludge in the sump, you need to clean the centrifuge before running the bike.

It does look like a Yuri kit bike, is it one?

Yep! I plan on delving into the centrifuge next. Are there any good threads that explain the process? I found one but the pictures were no longer available.

My guess would be that this was an eBay “build your own” bike. It’s one that I’ll slowly disassemble and rebuild over time, so no worries in that regard.
Top

Winter Soldier sidecar with the rest of the bike wrapped in black leather? Hmmmm.

Return to “General Hammerin' and Wrenchin' (all model years)”