Planning a local ride or a Rally? Let other folks know here so they can ride along.
Forum rules
This is the place to plan a ride or let others know about upcoming rides. Please post stories and/or pictures of the ride once it happens in the "Ride Reports" section. Please put the city and state of the rally or start of the ride so folks can attend.
Post Reply
89 posts

-T
When you come to the fork in the road, take it!
Yogi Berra 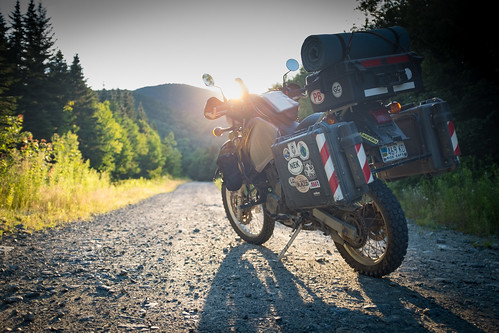 So, I went on a little scouting trip this weekend. I went on the KLR because the Ural has got some clacking noises coming from the tranny.

I used a GPS track a guy I know gave me. I went from Bingham, across the Kennebec, up through the woods to the Dead and then west and out onto Long Falls Dam Road near the Camp of the Dead. 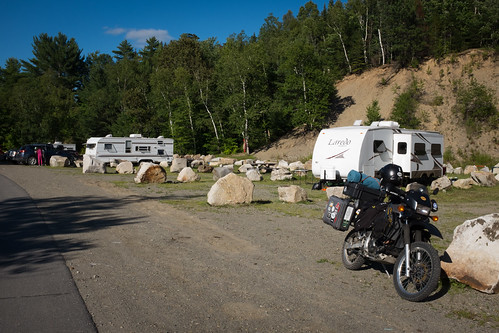 All is well at the Camp of the Dead. They just added rocks staking out the gravel pit sites. They made them long and skinny so people can't park their campers sideways, taking up more than their fair share. 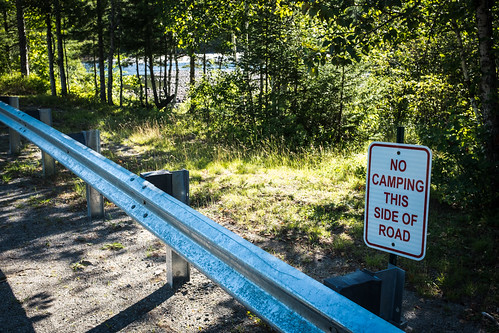 They also put a guardrail up on the water side of the road so you can't put a camper over there anymore. 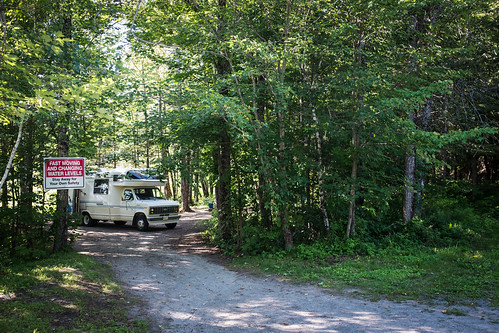 They left our spot untouched, including the private privy down there. 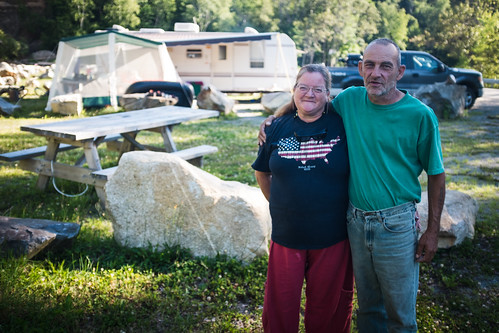 I met the summer caretakers, Dave and Linda. They will be gone by the time we get there. 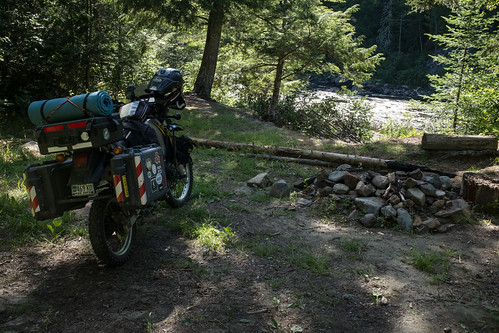 Incidentally, I found an amazing free site in the woods, 20 minutes from the state site. It was private and secluded with its own little beach on the Dead. 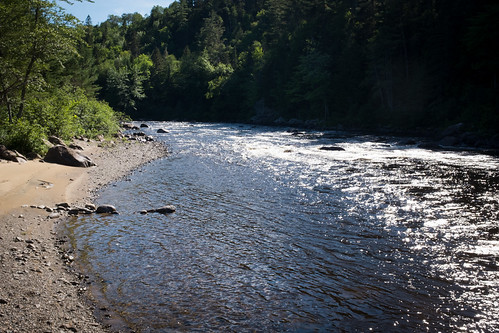 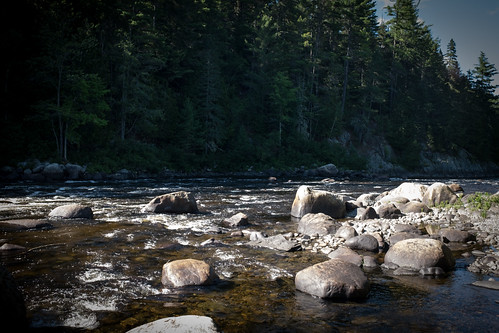 Unfortunately, it's at the bottom of a steep, gnarly trail. I barely got down it and I feared I'd never make it out again. (It's actually steeper than it looks in the photo below.) The rough bit isn't too long though. Just 20 yards or so. If six of us went down there with shovels, we could have it Ural-ready in an hour or two. Just saying. It's an option. 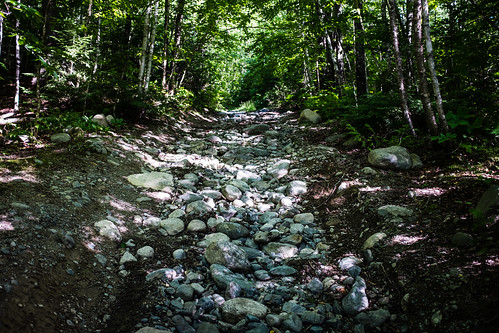 Anyway, from the COTD, I continued over to Eustis via the backside of Flagstaff Lake. Then, I followed the GPS route up 27 and into the woods at Kibby TWP. Then I went through the woods towards Holeb. It got dark just shy of there so I made a fire and cooked some food. 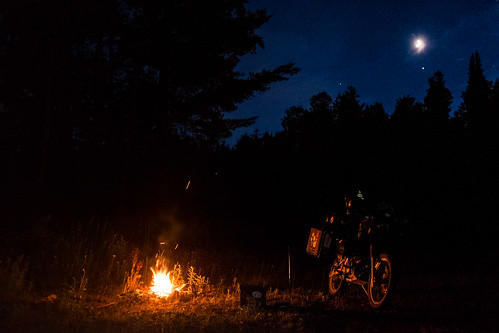 By 10 p.m. I was fed and a little refreshed. The moon was setting and the sky was crystal clear with very bright stars. I decided not to camp there. I felt like riding. I saddled up and crept down the dirt road in second gear. A couple of guardrail-less bridges came up rather quickly in the dark but I was able to avoid disaster. I went near where I think the old Holeb train station used to be, crossing the RR tracks in the middle of nowhere. After about 90 minutes, I came out on 201 and rode down to Jackman. I checked into a fleabag motel at 11:30 and strolled across the street to a hoppin' redneck bar. Some drunk dude bought me shots. It was fun. 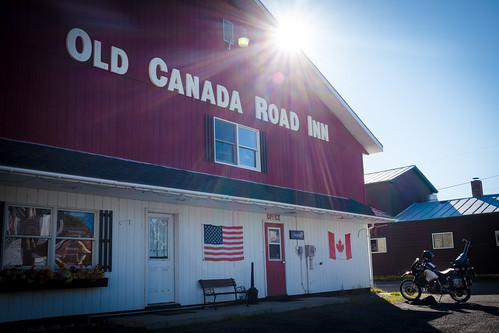 In the morning, with my head slightly fuzzy, I rode back to Portland. 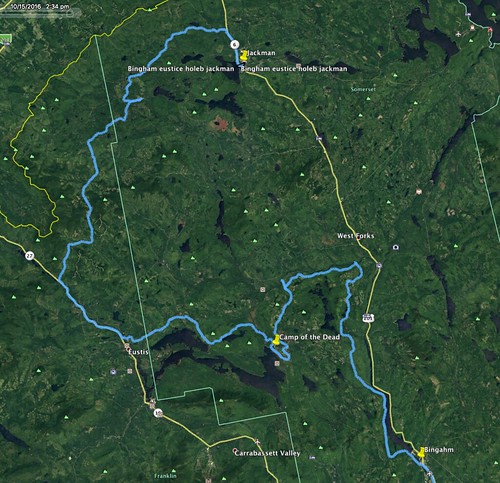 The loop I did would make for a long day's ride from the COTD and back around. But it's totally doable on Urals or a bike with dirt capacity. It's all logging roads. Some were better than others, though. I don't think you'd want to ride all that gravel on a Goldwing or a R100. From the COTD to Eustis to Jackman to Bingham to the COTD is about 186 miles. Most of it is dirt.

The only problem with the primary site is it only has one good spot.
Thank you Troy
John
The Ural's made Maine a much bigger state.

VWK75S wrote:The only problem with the primary site is it only has one good spot.
Thank you Troy
John

You mean there's only ond good site at the state free area, or just one good place for a tent at that site?
2010 Patrol T
2007 KLR650
www.mysteryjig.com
Top

Yeah I was thinking the same thing because we had all those people in that site last time and John picked it out
“Simplicity is the ultimate sophistication.” Leonardo da Vinci
2008 Patrol
2016 Versys 650 LT
2011 Gear Up
Top

Hogmaine wrote:We do need a plan "B" if that site is taken

There's two adjacent wooded sites on the other side of the road, at the end of the pit.
2010 Patrol T
2007 KLR650
www.mysteryjig.com
Top

Hey guys, been a while. How many are going roughly, and is going to be primary Ural's or two wheelers, cause if it's the latter I'd run my 1190r instead of the gear up
Top

John
The Ural's made Maine a much bigger state.

I'll be on the Patrol if it's fixed, KLR if not. But to have fun in this location, dirt riding is essential.
2010 Patrol T
2007 KLR650
www.mysteryjig.com
Top

Captain Canuck wrote:Hey guys, been a while. How many are going roughly, and is going to be primary Ural's or two wheelers, cause if it's the latter I'd run my 1190r instead of the gear up

As of right now, 5 are going. The first post has who's going.
When you come to the fork in the road, take it!
Yogi Berra

We are missing a few regulars I think ....What gives??