Here's a place for the group to discuss their other brands of bikes, hobbies, and personal interests not related to Ural & Dnepr Sidecar rigs. But not politics...
Forum rules
Here's the place to chat about off-topic stuff, hobbies, and other toys you got. No political posts, they will be deleted and the poster warned. We're not always "politically correct", but the Steeds site is apolitical.
Post Reply
47 posts

Thanks for the replies and thoughts. I'm going to borrow buddy's DR for a test ride next weekend as I've never ridden one, but have tons of experience on a KLR. The DR's dowdy looks don't exactly wow me, plus the DRs always seem to need two upgrades: bigger tank and better seat. All a KLR needs is a doohickey replacement and crash bars. Both need better skid plates and handguards.

I'll admit to having a soft spot for KLRs (I used to hang put at klr650.net and hosted two Tech Days) but I want to give the DR a fair shake. Buddy who had KLR and now has DR says the Suzuki is much better offroad due to being 66 pounds or so lighter. The lighter weight makes it peppier on the highway, but is a drawback in a crosswind.
2004 Ural Tourist (2004-2018, 48,000 klicks)

Both great bikes, I know people who own or have owned both. Both are big and heavy in the dirt, the DR is better in the dirt. Both can travel, the KLR is better on the road. I am a big guy and ride a 450 and 650 offroad and if you are going to treat it like a dirt bike look at a 250 or 400, otherwise find a good buy on one the fits your body and is setup to your liking
2007 Ural Retro burning up the road at Ural speed.
Some of my family have asked if Urals come with social lives, I am thinking they do, we have met the nicest people with our Ural.
Top

Plenty of aftermarket available for the DR too:

It really seems to be gaining in popularity.
Jon

The weight factor is a good decider though both bikes are real pigs for Dirt and/or trail. But something you have to give up when you think Dual-Sport. I hadn't realized the DR was so much lighter (66lbs.) than the KLR. A bit better off-road I guess but you'd get blown around on the street getting there. When a semi would pass me on the highway I'd sometimes felt like a sail.

I also like the older style KLR's and there are a lot of them out there used and for a good price. Plenty of folks loaded them up with upgrades and farkles but never quite made that trip to Paraguay so some good deals. I had 50-50 Mefo's front & back on mine but bought the bike primarily as a NYC commuter which it was great as. Took that cue from NYC MC Messengers who all seemed to ride KLR's and not DR's.

Funny as I'm looking for a cheap dual right now but both of these are too heavy. Just want it to be enough horsepower to haul my 220lbs. around yet still be registered as a streetable. Not racing anybody. No bigger than a 350 or smaller than a 200. All four Japanese manufactures made dually's in this category at some point so it'll probably be something from the 90's or 80's. Maybe even the 70's. Something cheap that if I used just a few times a year I won't feel financially guilty.


IMG_1309.JPG
IMG_1311.JPG
You do not have the required permissions to view the files attached to this post.
Stagewex

Ah, I loved my '99 DR350! I had the electric start (magic button), a fork valve job, a weight loss effort (removed passenger pegs and other unnecessary farkles), a real cool aluminum airbox made by a guy in OR, a 435 bore kit install, FMF exhaust and some go-fast stickers that made it quite the woods enduro competitor.

As I was in the same club with the Lafferty family, I often did trail maintenance work with Michael and Rich and Jack Sr. One time Rich asked if he could try out my bike as he thought it sounded great (how do you decline to a guy with that kind of reputation?). I thought my bike would never be the same...

But when he brought it back about 30 minutes later, he said "I would race that tomorrow". Wow! Quite the complement from an experienced racer.

Rich rode for Suzuki but Michael raced for KTM. Jack Sr would typically place 4th or 5th overall when the National came to the south jersey Pine Barrens. He was quite the fast guy for being as old as he was. The Lafferty family is quite the legend in south Jersey. We used to say that Jack Sr had three sons- Fast, Faster, and Fastest. Jack Jr was a National Champion for many years, then Michael took his place and, I think, won even more championships than his brother before retiring a couple years ago.

I'm seriously considering a DRZ400 as my next bike...but I would be all over a DRZ650 if Suzuki ever made one.

"Media bias contributes to erosion of the perception of truth." Tanya Marcum
Top

I have a 2nd gen KLR. Bought it used, Love it, but have never ridden the DR either.

I think if I owned a GS I'd look for a 300-400 size bike for 1-2 day trips. I'd get a desert tank or extra fuel bottle, ect and Never look back. I'm not very skilled, so the KLR is big and heavy enough to keep me honest. Biggest trip I have ridden on I t was 5 days over part of the AZBDR. Some technical(ish) stuff and some off the map exploring as well. I'd +1 on the soft bags idea. I had some pelican knock off's and when the left side contacted a rock bigger than it, I had to resort to duck tape and straps for the remainder of the trip. Apropos for the KLR though.

Another of life's tough decision's made!

or maybe it was not so tough seeing your reaction to the weekend ride...

A lot depends on where you are and what you ride. I was not so impressed of my KLR650, but she let me down in xx.000miles only once. Hole in the radiator luckily only 350m away from a good shop. As I Iive in high mountain range I would prefer a lower and smaller bike. 350 to 450 enduro or cross bike oil or water cooled.
The local bike rental got rid of the KLRs and went to DRs. They say less trouble with radiator leaks, less tip overs and more rigid bike.

The Ural needs definitely a low range gear box and perhaps a few further fans for down town and long climbs up to 3500m.
Sven
Sophie Travelair = Patrol 2013
8 weeks 12.000km Oregon-Alaska-Oregon
With a DIY foam air filter the rig runs well even in tropical rain =

I started dual sport riding on a DR650 after doing a lot of reading and spending way too much time on ADV rider. Came with IMS tank and a few other goodies. I added quite a bit, by far the biggest improvement was the Racetech suspension upgrades. Around the same time my wife had a KLR. The KLR was much more comfortable on road, the DR better (lighter, less to break) off road. But I sold the DR and got a WR250R. Highway speed was nearly identical to a DR or KLR (rode with each, neither of us could pull away from the other). Wonderful bike for forest service roads, ATV trails and some single track. No dirt bike, but quite capable. But...a bit underpowered for mountain roads, especially with any kind of headwind and at elevation. Eventually ended up with a Tiger 800XC. Far better suspension than the DR or KLR. Far more power than any of the 3. An amazing motor and smooth transmission. But...heavier than the rest. By the time I got it, my riding skills had improved to the point where that didn't bother me too much (but they are still lacking!).

One thing it took me a bit to learn. Don't stress about finding "the best" bike. There is no such thing. Everyone excels somewhere, but is lacking elsewhere. What makes a good street bike makes a bad dirt bike and vice versa. And until you get something and get some experience with it and the type of riding you really like, you won't know what is best for you. But in the case of the OP with the GSA, you obviously know something about the sport, and have the street/long distance/forest service road side covered. As such I'd go something more dirt oriented, especially if long road trips weren't in the works with it. WR250R, possibly a DRZ or if money is no object, a KTM 690 Enduro or Husky 701.
2007 Gear Up
2012 Triumph Rocket III
2013 Triumph Tiger 800XC
Top

I have a 08 KLR
32lt tank, Ricor shock & Intimenators,Eagle Mike doohickey, larger front disk kit
to overcome the usual built to a price faults most jap bikes have out of the box
For long distance all roads touring its magic .60,000+ km and never missed a beat,still going like a new one , it's a keeper.
If I was doing more close to home single track maybe a DR would be more suitable ,horses for courses.

I loved & owned a number of big British singles (500cc) I Bought a 2010 Royal Enfield G5 Deluxe a few years back. It has 19" wheels & Dunlop K70s. It's is set up to handle like a vintage racer. I'm not an off road rider or traveler, just enjoy going out for a good romp. It is great for that & pretty to.
Current Motorcycles: Improved 2002 Ural Tourist.

I have owned and ridden them all and I vote for the DR650. For what my opinion is worth. The KLR was just too tall and heavy for me.

For what it is worth here is where I ended up on a mid/heavy dual sport. Not that you even asked 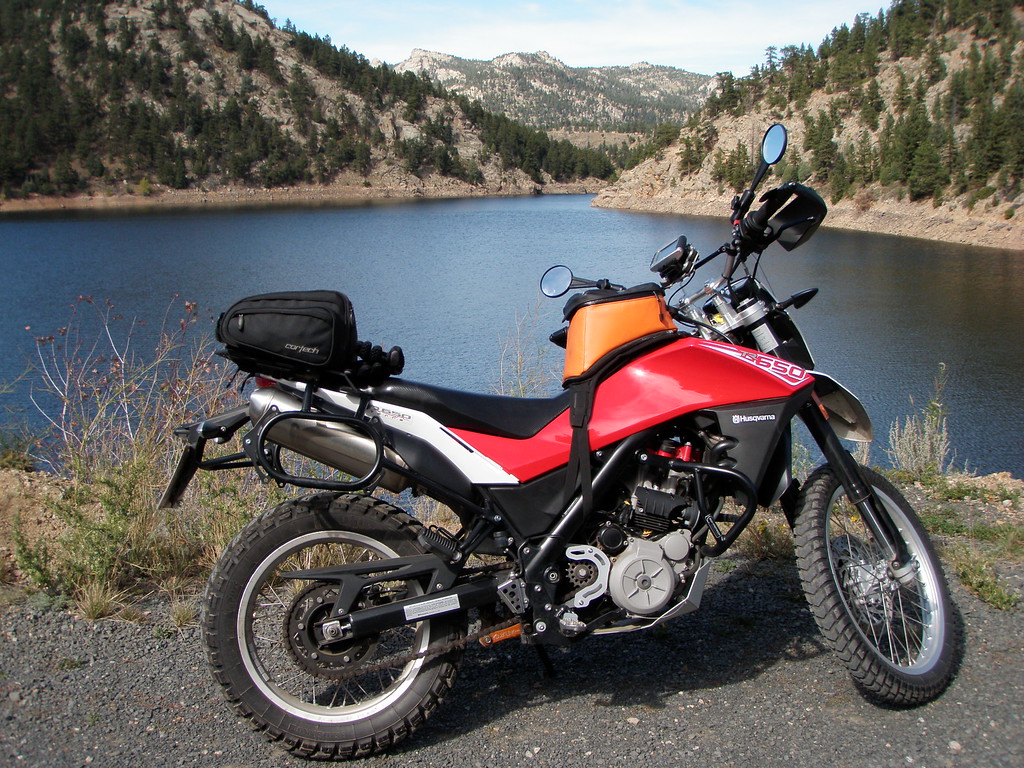