The sidecar body is on the frame (finally) but before the wheel touches ground I need to replace the old shock. This one is a rusty hulk with an eye on each end.

I'd assume a mono shocked bike one will be too stiff for the car unless it's a really light bike. Also OEM Dnepr / Ural ones aren't quality units?

Does anyone know of a replacement shock I can find for a reasonable price on the bay?

There are some fine Ukranian & Russian vendors who could supply the very Dnepr Items you need. I have bought from Arbelest & iUral, they are on the grey or black market section.
Good luck.
Current Motorcycles: Improved 2002 Ural Tourist.

This one is a rusty hulk with an eye on each end.

You mean it does not have a clevis at the lower end?

So, the PO whacked your sidecar swing arm? Man, I thought I had a frankenbike. Given your situation, I'd take the shock to either an independent motorcycle shop, an RV (as in quads) shop, or even a car parts store and see if they can get you close.

Dan alexander wrote:you figure that's a better way to go than look for a M/C shock that my have better damping, remote preload adjustment and nitrogen filler?

I'll put it this way, & not trying to be a smart a$$. I'm guessing you're new at this. First thing I learned about performance preparation, is to get things to STOCK performance levels, & proceed from there. OEM's were engineered for the job. Original shocks stop being useful when they are seized. Even rusty ones that move will still smooth out the bumps - they just don't dampen the recoil.
There are tremendously expensive shocks available, & if you are the type of rider that will benefit by them, & can afford to spend 5 times what a stock shock costs - then maybe you need them. I have owned Dnepr & Ural Tourists, & enjoy riding in a sporty manner. MY STOCK SHOCKS HAVE BEEN COMPLETELY SATISFACTORY FOR ME.
Having Managed/maintained/built my own motorcycles for over 50 years, I chose to go for the old standby OIL FILLED SHOCKS. Remember most Motorcycle Telescopic Front forks are just large oil filled Shock absorbers (rebuildable is good). The SPRING STRENGTH & RATE on shocks is the MOST critical factor. The differences I've noticed between AIR & GAS FILLED vs. OIL FILLED shocks is the huge cost difference, & that the ability to hold in the gas & air is much shorter by years than OIL FILLED. For Example My Royal Enfeild Bullet came with AIR SHOCKS & SOFT SPRINGS, That were shot in 2 years, & the bike handled like there was a hinge in the middle - Not good. Everybody on the Enfield Forum recommended spending about $300. for a set of GAS FILLED HAGONS. I bought a set of totally chrome OIL FILLED, with correct springs, & got superb performance for my $100. pair.
This is what I know about shocks, & why I think you would be well served for years with stock shocks - plenty of other important items in getting it running to spend money on.
Best of luck, Craig
Current Motorcycles: Improved 2002 Ural Tourist.

Sure with time/money/skill you or someone else can cobble on any shock you think you need/want be it air, KLR whatever shock. Try the rusty shock you have now that you know fits before spending money on things you likely don't really need. Rusty shock outsides have nothing to do with the magic that happens internally.
Do you "need" an airshock that's easily adjustable between the Isle of Man and Six Day Trials use? Keep it in perspective. It's an old Dnepr sidecar outfit not a race Porsche.
Joe
014 GU
"I'm lost but I'm making good time."
Top

this shock fits a bit off centre as the eye on the bottom calls for offset installation.

Dan alexander wrote:this shock fits a bit off centre as the eye on the bottom calls for offset installation.

BTW it's not an outfit, it's going on a GS with DMC subframe plus thinking everything through keeps my OCD happy !

If it has an eye at each end, have a look at Harley air shocks. Should be cheap enough and about the right length.
Top

this shock fits a bit off centre as the eye on the bottom calls for offset installation.

Wait a minute... are you saying the shock is not "perpendicular" to the ground. Can you tell if the swing arm shock mount has been modified? If the lower eye of your shock is simply bolted to the side of the original shock mount, then a stock, double clevis-end, Ural/Dnepr shock should bolt right on with no further problems. Or hassle. You'll find them on fleabay. But if you buy from abroad they'll have to come surface (can't be shipped by air), and you'll wait forever. 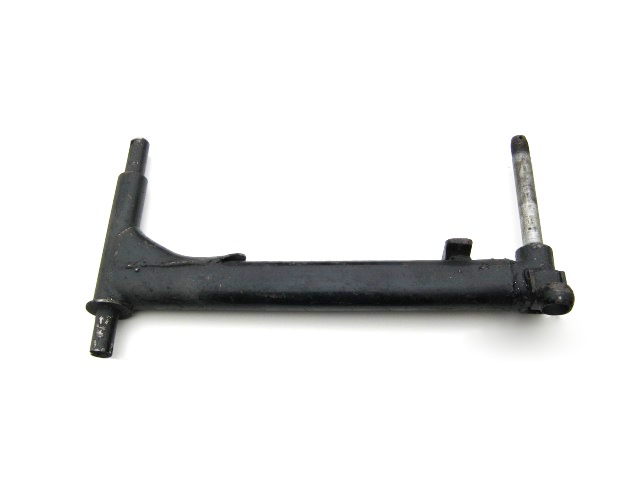 And I'm with the others, a stock shock is what you need.

I was ready to pull the trigger on a five Hagons (leading link fork), but now I think I'll give re-building the hack shock and see how it goes.

As an aside, does anyone know if "other" spring rates are available. I should stated that differently... I know they're available, but does anyone know from whom... who?
Lew Morris
Dnepr w/ '06 Ural Drive Train
C5 Power Arc
125/42 jets
Drilled slides/
.030" shims