The "Pimp my Ride" section for Soviet bloc bikes. Everybody seems to have their own custom add-ons, modifications & accessories. Share your tips and post pictures of them here.
Forum rules
This is the place for topics concerining modifying and accessorizing your Ural or Denpr.
Post Reply
37 posts

I picked up my steering damper kit from Ben at Ural NW Saturday, thought I'd share the install experience.

As noted in other posts, there are no instructions with the kit so I'll go into a little bit of detail in the write up and post pics at the end. Tools were a 5mm allen and 13mm combo wrench for the hardware, a 4mm allen for the body clamp and a pair of 19mm wrenches for the upper strut bolt. Also a punch, hammer and whatever else it takes to get the pin out.

First remove the original damper plate, anti-rotation pin and friction plate. Keep original adjustment knob and hardware up at the top of the triple trees. The threaded shaft of the adjustment knob is the inboard mounting screw for the triple tree bracket (TT bracket). For the folks who were hoping the kit would eliminate the adjustment knob, use a length of 8mm all-thread/flat washer/acorn nut to replace the big damper knob.
Getting the anti-rotate pin out proved to be the most difficult part of the install for me. The pin is set up from the bottom in a hole in the lower triple tree and spread at the top like a rivet. Most folks have been able to just drive it out from the top, and basically that's what I did. However, mine did not just drive out. I had to knock the flare off the top with a small cold chisel. I also had to work the chisel around the joint at the bottom and twist the pin around with a set of vice grips to get it loose enough to drive out. In addition to covering the gas tank I'll throw a caution in here to cover the front fender with a towel, to avoid the nick I put in my paint.

Next, install the TT bracket. There is a collar on the bottom of the lower triple tree that fits a recess in the top of the TT bracket. It is a very tight fit and I had to work it on and off a couple of times to scrape the paint off. A bolt goes thru the hole where the anti-rotate pin was removed. There is a single flat washer in the hardware kit. The TT bracket does not quite sit up flush to the face of the lower triple tree, so that washer goes between the face and the bracket on the outer bolt to keep everything square.

The frame bracket mounts on the forward side of the upper strut mount. You can leave it a little loose to help get things lined up during the install. When you're done make sure the bracket is vertical and tight. The vertical position insures the heim joint is in a neutral position with the wheel centered, and gives the joint max range of motion as the wheel is turned.

Finally, the damper mounts with a rubber bushing at each end between the heim joints and the brackets. It mounts to the bottom of the TT bracket, and the top of the frame bracket. Edit: Some folks report their damper lines up better mounted to the bottom of the frame bracket, vice the top as on the 2014's. After further review on my 2013, it's about a w@$#, with the below the bracket mount giving slightly less pinch on the throttle cable. I'd suggest you try it both ways, and decide which is best for your rig. In either case the rubber bushing goes between the mount and the heim joint. To adjust the body clamp, loosen the two clamp screws and make sure the 'clicker' adjustment is set all the way in at "16". Turn the wheel full right and it will pull the body back thru the clamp. I would give it a little extra gap, just to make sure it doesn't bottom out, but not so much that it will bottom out when turned the other way. The purpose of this exercise is to center the body on the shaft.

Total time for me was about two hours, much of that spent getting the pin out then figuring out the trick of the washer. Hopefully your time will be less.

You do not have the required permissions to view the files attached to this post.
Last edited by Freddie on Tue Apr 08, 2014 5:16 pm, edited 3 times in total.
2013 Patrol, Blue & White {the fast one} '09 Harley police seat w/ Utopia backrest, Heindle risers, brush guards, Hippo Hands and heated grips. Fingers are warm, life is good!
Top

Freddie,
Nice job on explaining and documenting the install. Have you had a chance for a before and after ride? Impression?
Thanks,
Top

barnone wrote:Freddie,
Nice job on explaining and documenting the install. Have you had a chance for a before and after ride? Impression?
Thanks,

It seems like the reason every magazine write up loves the 2014 so much is the improved handling. Besides disc brakes, (i personally have no issues with them and stopping) i imagine this should get the pre 14's on the same playing field.
My 2013 Forest Fog GU Build: http://www.sovietsteeds.com/forums/view ... 11&t=31227
Top

I installed the body clamp under the small bracket so it all sat level and worked the pivot joints evenly. click on foto to enlarge.

You do not have the required permissions to view the files attached to this post.
2010 Black Patrol 95,000km's
Top

Msblu79 wrote:I installed the body clamp under the small bracket so it all sat level and worked the pivot joints evenly. click on foto to enlarge.

I tried that position too, but it pinches the throttle cable hard up against the frame. Decided to go with it above the bracket to match the 2014's. One thing I couldn't match the '14's on was routing the side car wire bundles under the frame mount. Don't know if it's because the '14's have a different harness, but the wires lay nicely above the bracket.

Thanks guys for the kudos. Just trying to pay back a little for all the help I've gotten from this site.

Just a short test ride so far, so jury is still out on how much of an improvement it is.
2013 Patrol, Blue & White {the fast one} '09 Harley police seat w/ Utopia backrest, Heindle risers, brush guards, Hippo Hands and heated grips. Fingers are warm, life is good!
Top

I think you may be right about the frame mount. On further study of the 2014 pic's, it looks like they may have moved that mount lower on the new bikes. I went back out and re-checked my 2013 and it's about a w@$#. Both positions pinch the throttle cable at full throw. I decided your positioning actually pinches a little less, so I'll run with it. Edited the original post to let everyone know to check theirs.

Edit: Got a chance to look at a 2013 and 2014 side-by-side at my dealer this weekend. The mount point is at the same position on the frame, but the upper clevis mount is a bit over two inches long on the '14, vice pretty much against the frame on the '13. That explains why the wiring is routed behind the strut on the new ones. I think it also accounts for the lack of throttle cable pinch.
Last edited by Freddie on Tue Apr 08, 2014 5:24 pm, edited 1 time in total.
2013 Patrol, Blue & White {the fast one} '09 Harley police seat w/ Utopia backrest, Heindle risers, brush guards, Hippo Hands and heated grips. Fingers are warm, life is good!
Top

It should fit the retro, but I don't have one here to look at closely.
used to work for Ural NW
prior ride 2003 tourist
future ride 20?? Gear Up
Top

I guess I should get mine installed sooner than later. I like how it retains the friction damper knob.
Barry

How do you adjust the damper? I understand there are several settings on it for resistance. Where do you feel you get the best effect?

The shaft that passes through the damper has a small knurled knob. When you turn that shaft you'll feel the "clicks". I count 16 distinct clicks with a sort of mushy 'overdrive' at each end which I would not recommend using. All the way counter-clockwise is minimum damping, so I'm calling that "1". All the way clockwise is the "16" at max resistance.

Installed my damper, really easy, took all of 20 minutes. 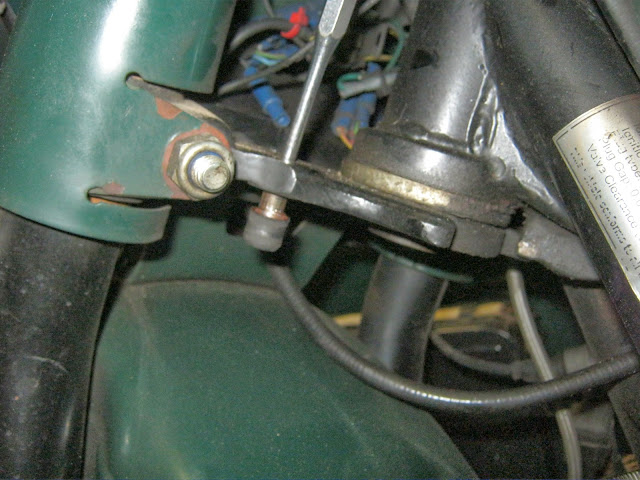 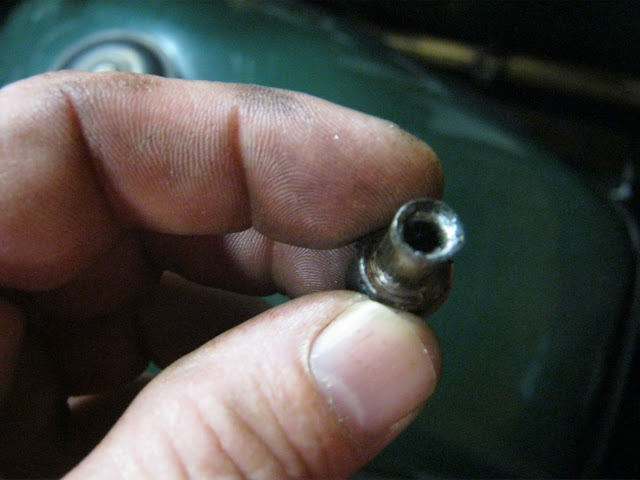 I went under the brackets on both ends, it doesn't really seem to matter, but Nik told me the left bracket must be perpendicular to the thrust of the damper, you don't want it pushing up or down on the bracket,also make sure you center the damper body on the rod when the front end is centered and that it doesn't hit in either direction. 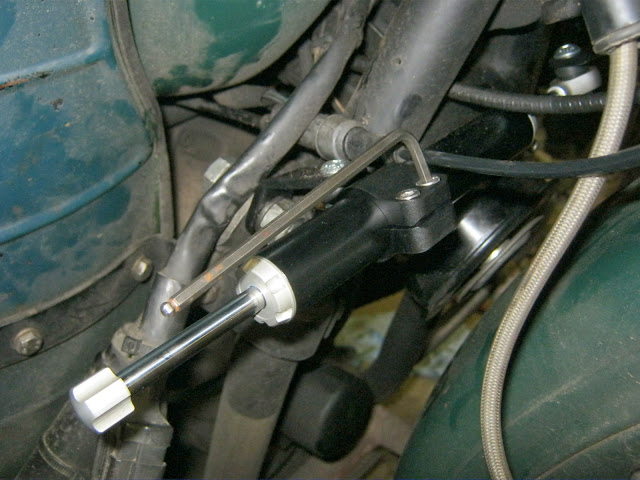 I took it on a 20 mile test ride, and was really surprised at the difference, especially in the twisties.
Yaw under throttle and braking is reduced quite a bit, at first it feels like its totally eliminated, but really it happens really softly and slowly. It has less tendency to follow irregularities or the crown of the road. The really big difference is how it tracks through corners, even if the road is really rough, it tracks exactly where you point it.

The entire range of settings is better than what the friction damper can provide at its ideal setting, fooling with it some I found the 8th click out to be pretty good. Its a little harder to adjust on the fly because I have leg guards, but its not too bad. I didn't get on the freeway but going by my experience with the 2014, I expect it to be an real improvement there too.

Easy to install, easy to use, significant improvement in handling, I give it a 10 out of 10. I would say if its in your budget, its a must have.
Barry

Recieved and installed mine. The fit and finish is nice, and it went in easily. Hardest part was punching out the press shaft; however, a little pursuasion with a hammer, and it poped right out. I blew my tire on a run in the rocks, so I will need to wait until my new tire comes in to test the damper. I have initially set it to about 16 turns to see how it feels based on what others are stating. Since others have posted pics, I don't feel I would add anything by posting more of the same. Thanks for all who posted pics, they helped a lot with understanding installation.