Welcome Comrade! Pull up a barstool and order yourself a virtual vodka or Baltika and enjoy the camaraderie of other Soviet bloc bike enthusiasts. Nastrovya! This is the place for generic conversations about bikes and life in general.
Forum rules
This is the place for general discussion about motorcycles and life in general. No political posts. Use The "Other" Toy Box section for other bikes, guns, collectibles or hobbies.
Post Reply
39 posts

Well, as expected, quite a variation.
Maybe easier to decide what is common with M63s...........
The nannies, noobs and marketers have ruined this place.
Top 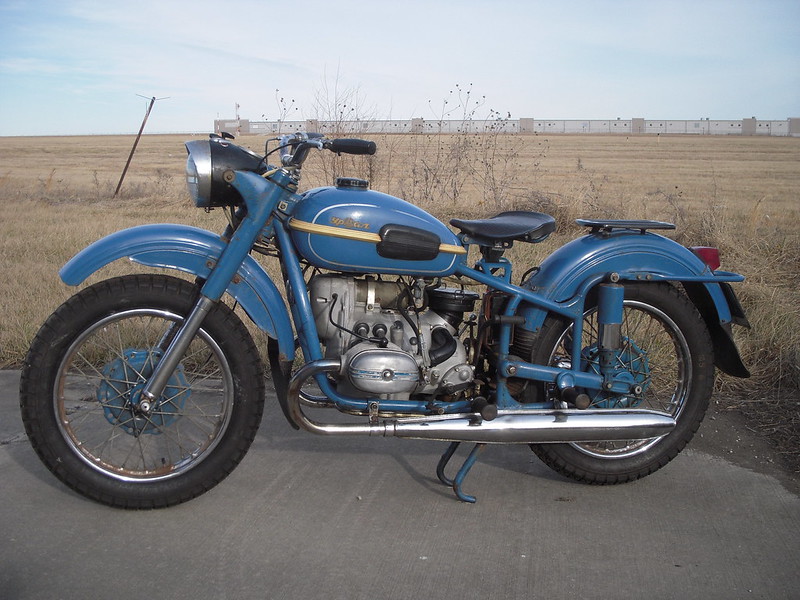 The nannies, noobs and marketers have ruined this place.
Top

Re: RE: Re: Help identifying my bike

GregAus wrote:The alternator output as standard with a Relay Regulator PP-302 will output a nominal 6V. If it is in good condition you can use a 12V regulator to output 12V. Most people use a H-D or VW regulator for their 12V generators and hide it in the Bakelite box of the PP-302. Alternatively, if you've got the skills you can make an electronic regulator for either 6 or 12V. http://vurd.name/2014/06/28/электронный ... ор-рр-302/ use google chrome or similar to translate.


propwash wrote: The following things are incorrect for a M63
- fuel tank
- carbs
- tranny
- small things, like regulator, brake switch and possibly, do I see spring under seat?

Hard to see all from the pictures.

The M63 would have the banded tank, K301s, a tranny with integrated metal air filter, rear brake switch on the brake pedal shaft, rubber cushioned seat and a big electro mechanical regulator.
Does the engine have a filter in front? The M63 did not.

Early M-63 did not have the banded tank, they continued using the tank from the M-62 as on this bike. Very early M-63 also used the M-62 mudguards (fenders) with a different rear guard mounting system. Prototype M-63 even had rear shock mounts similar to the BMW /2 and early brochures showed the bike with those shock mounts. The 1969 M-63 brought into Australia had these tanks (mostly), the 1971 models had the banded tanks (mostly).

New plate from http://www.oldtimergarage.eu/catalog/pr ... ts_id=1810 Aluminium, not the original steel.

Thank you for the input, I managed to read the plate, indeed I could see the IMZ logo in a circle, also I could read the year which is 1967 and the model which is M-63, this is great, thank you, I also have the frame and the engine number.

Sent from my ONEPLUS A3003 using Tapatalk
Top

It appears to have an early Dnepr fuel tank. An early Ural tank would have concentric circles on the knee pads, very much like an early BMW knee pad.
Top

My 1974 m66 has an identical frame. I always thought these early frames were more robust and nicer looking then the later versions.
Top

The long Aluminum lever on the transmission is EXACTLY the same one as a Chinese CJ LONG REVERSE LEVER I own, & the Transmission resembles older CJ'sI have seen. HMMMM ? Any Chinese characters stamped on it anywhere ? Could it be a OHV CJ ?
CJ parts are reasonable & obtainable from a few good Ebay vendors.
Congratulations on your find. C.
Current Motorcycles: Improved 2002 Ural Tourist.

brianural
Hero of the Soviet Union - 2020

To restore Ural you will need this:
http://krueger1.chat.ru/moto/oilseal.html

If really interesting, then write the numbers on the frame and engine
Garage interpritation of russian saying: "Eyes are afraid - Ural rides.", "Everything leaks, everything repears."